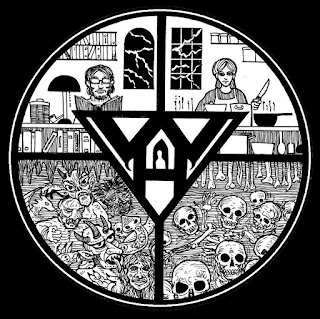 WITCH HOUSE is an amateur magazine that seeks to discover, inspire, and publish emerging horror authors who are enthusiastic about the pulp fiction tradition of a modern gothic literature called "cosmic horror." Writers in this tradition include (but are not limited to) the following: Edgar Allan Poe, M.R. James, Arthur Machen, H.P. Lovecraft, Clark Ashton Smith, Robert Bloch, August Derleth, Shirley Jackson, Stephen King, and many more. “Cosmic horror” emphasizes helpless protagonists, unexplainable monstrous menaces, and fictional occult themes such as forbidden lore and evil conspiracy. Some “cosmic horror” blurs the lines separating mystery/noir, crime fiction, and horror, but it is distinguished by a dramatic deviation from the reality principle. At Witch House, we prefer lyrical, literary, and artful terror of the sublime that unsettles subtly rather than gross-out gore. Published by Spiral Tower Press.
Managing Editor: Dr. Jason Ray Carney is a lecturer in the Department of English of Christopher Newport University in Newport News, Virginia. He is the co-editor of the academic journal The Dark Man: Journal of Robert E. Howard and Pulp Studies and the area chair of the "Pulp Studies" section of the Popular Culture Association.
Associate Editor: Chase A. Folmar currently resides in Virginia with his wife and their growing horde of pets, where he spends far too much time in from of a computer screen, both for his real job as a CAD programmer and his imaginary one as a writer. He graduated from the University of North Carolina at Asheville with a degree in English Literature, and has an avid interest in all aspects of speculative fiction, specifically with the weird. He is a firm believer of the notion that one can never have too many books.
Associate Editor: Luke E. Dodd is a scientist, devourer of music, and collector of hobbies. He is one of the three hosts of The Cromcast, a podcast dedicated to the works of Robert E. Howard and other weird fiction. He lives in Kentucky with his wife and son.
WITCH HOUSE on Facebook.
WITCH HOUSE on Twitter.
TIP US on Ko-Fi.
Cosmic Horror on Reddit.